No itineraries transferring from tyre to RIDER

I've had my RIDER for several years, its one of the earlier models.
Suddenly, it will not accept any itineraries except the one that was on it.
It had an itinerary on it, I went through home to remove it. Then tried to send an older route to the device. The window pops up that it was sent, but when I go to open it, its not there. I tried creating a new one - same result. If I try to send again, the window says its already there and asks if I want to replace it. But when I go to manage intineraries on the device, its not there.
The crazy thing is that when I go back into manage my device in the tomtom home app and go to the tab that says its a list of things I can install on my device, the itinerary that I deleted is listed, I click on it to send to the device and it works!!!
So how come none of the other routes will go to it, even though it says it does but this one will "restore" back to it? Where is it being restored from? Do I need to move all the routes to this file? Why would it say it sent the others but not be there?
Totally confused.
Ad

So...I tried tech support and described my issue. The man said he would discuss with the technical development team and call me back in an hour. 4 hours later, still waiting.
Called back, talked to Lloyd who transferred me to Punam, who got my email and quickly disappeared, leaving me holding on dead air for over 10 minutes before I gave up again.
C

After resetting my device to factory default (which the tech said would take an hour but only took a minute) and reloading the device, it still does not accept files to display. A 6th call to TomTom support said that my device was at end of life, they no longer support the software Tyre 6.5 and I have to buy a new device. So I had a GPS that worked fine, I did over 7000 miles of routes with it last year, and now I have a paperweight.
Thanks, TomTom - you've lost a customer for life and anyone I can spread the word about this will get an ear full.

Before you bin it, I would like to know whether your generation of Rider appears as a storage device (like a thumb drive) or like a network card to your PC. If the former, it's a piece of cake to move things to your device after saving them with TYRE. Just a matter of copying it to the correct location (the 'itn' folder) on your Rider with your PC's normal copy functions.
C

I tried that, moved it to itn and still nothing shows on the device
Ad

If you copied an *.itn file to the 'itn' folder on your device and it doesn't show up, there's something really odd about your Rider that we need to sort. Have never seen that happen on any model of that generation of device.

After directly copying the file from your PC to that folder, try performing a reset on your Rider. Probably entails pressing the power button for about 20 seconds until the logo comes up and the drum sounds, then let loose oft the button.
Does that make any difference?
One more thing -- what is the full, exact name of the *.itn file?
C

I'll double check the file type when I get home
Does Tyre allow you to save routes as itn files?

Of course! That is one of its primary purposes. You originally noted that you were trying to save an 'itinerary', which would normally cause TYRE to send an *.itn type file to your device.

If you take your itinerary created with TYRE and "Save as" "TomTom Itinerary Files", it will produce the *.itn type file for you.

It would be interesting to know what files already exist in the 'itn' folder on your Rider.
C

if memory serves me, when I looked in the itn file directory there was an itn file and a zip file, both of the same name of the only route that will show up. Its the same one that was on the device when this all started happening. It shows up in tomtom home app under routes on the first tab (things on your device???) and if I delete it, it shows up in the third tab (things you can add to your device) so I can go back and forth with this one file but none of the others even though they worked before. I believe when I look at the others in the file system on my PC it shows them as GPX files.
C

OK, so I pulled in one of the itineraries and saved it as a TomTom Itinerary file as opposed to a Tyre Itinerary file, then loaded it to the itn file on the RIDER and now it shows up.
So, WTF happened that caused this to stop working as it had in the past?
Before I simply saved the route, and sent it to the device and it worked like a champ. No manual intervention.
At least now I have a way to keep using it.
Ad

Good to hear the device is acting as it should. Now the question is why TYRE isn't sending a proper *.itn file to your device's 'itn' folder.
I'll have to fire up one of my old Nav2 devices to test. What version of TYRE are you running, and on what sort of PC operating system? Have you changed either of those since you had success with TYRE in the past?
C

Tyre 6.5
Win 10 Home edition
No changes other than whatever factory updates Microsoft and TomTom/Tyre have downloaded. I used it twice last year, creating long routes in Tyre, saving it, then sending to the device, operating device, go to manage itineraries and its in the list. Here is the list of routes in the folder on my PC only the tomtomitn loaded in the itn folder on my device and the border to border shows up in the itinerary list. the border to border was the only one on the device at the time the troubles started.

If I go into TomTom home, Manage my TomTom rider, under the "items on device" tab, under Routes, I only see

So its like its sending these other routes somewhere else instead of where they need to go. Every time I try to resend the file from Tyre, it says they are already on the device, but I cant find them even using file manager on the device from the PC.
C

occasionally recently I've been getting a major JAVA error that appears to be based on the recent updates that seems to attempt to force me to use or point to MyDrive. I'm thinking this is the issue that they are trying to obsolesence (is that a word?) older units by forcing the support software to point to MyDrive which does not support the older units. 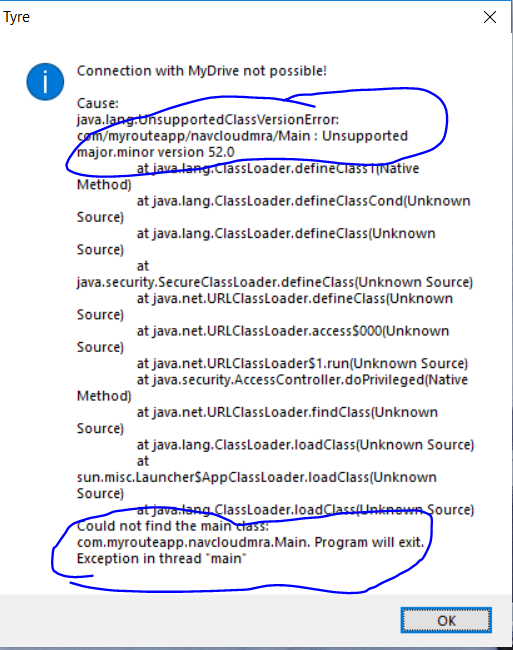 here's the itn file on the rider in file explorer

It's the app that produces the call to the OS to say where it wants files to go, so if there's an issue with writing a file to a simple 'storage device' (your Rider) folder, you'd need to take that up with the TYRE folks. There's nothing MyDrive can do to hijack that process.

Please note that TYRE was modified to also work with the newer Nav4 devices. Those DO operate using MyDrive instead of Home.
Crazy, but it sounds like TYRE may be mistaking your old Nav2 version Rider for a newer Nav4 version (e.g., 40 or 400).
Is the Rider the only TomTom device you have connected to your PC? If you also own a Nav4 device, and have installed MyDrivce, I wonder if TYRE is seeing a resident copy of the bridge software within MyDrive and making a bad assumption?
Ad

finally found the routes that Tyre said are on the device but would never show up
They are on the SD card on the device
Which makes sense to some degree, so why has the device suddenly stopped reading those? Did the update block reading the SD card, did the card go bad some how that allows it to be stored but not read by the device even though my PC/Tyre knows they are there and where to look for them on the device?

Yes, the TomTom Rider is the only device I have.

The Garmin/GPX folder is created on Garmin devices to hold *.gpx files, and that is what TYRE was saving to your TomTom (and your TomTom was rightly clueless about that folder). Unless you intentionally changed the output parameters for TYRE (do you own a handheld Garmin? - that's the correct structure for those as well), that folder is being created by TYRE in error, and need not and should not exist on a TomTom device. TYRE clearly thought you were working with a Garmin GPS instead of a TomTom, and saved the route files onto your TomTom as though it was a Garmin.

Yes, the default storage method for your route files was changed from TomTom to Garmin at some point in TYRE.
Ad

I dont know how that happened, but can you tell me how to change it back?