I have a TomTom GO 500 and I am looking for a way to save My Routes, just in case my TomTom fails. Is there a simple way to do this? MyDrive doesn't seem to do it Also, is there a way to save My Places on my laptop? I know it can be done through MyDrive, but not directly to my laptop. I cannot understand why TomTom makes this 'backup' such a nightmare to do. I am looking for a simple solution to save My Places and My Routes on my laptop, as a backup. I am using Macintosh.

I appreciate your help. Thank You
Ad

Hallo everybody, this is my 1st post, I'm getting out of mind because I need to save daily hundred of POIs, than I have to export them in my PC in a standard format, but with my new 5100 this seems impossible, making my job literally hostage of my GPS unit... I'd like to ask CANDERSON how that link works.
Thanks

Your 5100 is a little mini-server. While plugged in, your PC can access a VERY few locations on your 5100 device. You do so using a browser, and go to the url I supplied in the post above.

However, this only works for custom POI files (*.ov2) that you have already sent to your device from your PC, so that does not sound like what you are trying to do.

If I understand you correctly, you are saying that you are adding individual items to "My Places" on the device itself, and would like to move those from the unit to your PC. I do not know of a way to do that.

Of interest -- I had not recently had a chance to try the url I posted above, and while it takes me to the POI directory on the device, I don't see them there. Anyone else seeing this same issue?

I can't even get to the contents of the link, canderson. Not in Edge or IE11. This is with my Go 50 connected to the computer. But no problem seeing stuff in there when I connect my Nav3 device (Go 1535 LIVE). See attachment: 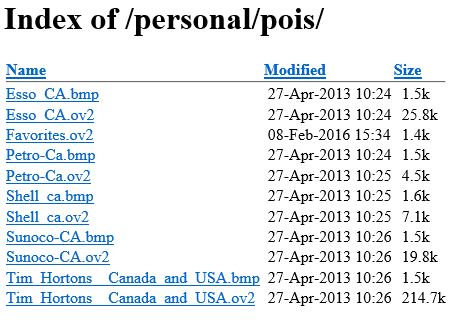 There is this about saving poi lists and other stuff to the cloud:

Looks like we have a new issue to report for Nav4. As I say, it's been a while since I've had need of that feature, and have no idea when it 'disappeared'. And yes, for these items, the url is the same for Nav3 and Nav4.

Still not clear what the OP is trying to accomplish, but it is true that if you add individual entries to MyPlaces on the device, they will appear in the online MyDrive page on the TomTom server. Still, if he's trying to get those entries loaded to his PC for some reason, that's another story. It IS supposed to be possible, but the results may not be useful.

From the MyDrive page, you select the "Settings" menu (cog wheel at the bottom of the icons), then select "MYDRIVE". There's an option there that says "Download your MyDrive data".

At present, I get a white square box in the middle of the screen when I select that option, which subsequently disappears on its own, but don't see that any data is being downloaded, or if it is, I have no idea where on the PC it is going.
The last time I did this (quite a long time ago), the file format wasn't very useful and required a lot of work to whip it into any useful shape.

canderson said:
Looks like we have a new issue to report for Nav4.
[ ... ]
From the MyDrive page, you select the "Settings" menu (cog wheel at the bottom of the icons), then select "MYDRIVE". There's an option there that says "Download your MyDrive data"

... don't see that any data is being downloaded, or if it is, I have no idea where on the PC it is going.
Click to expand...

Will add download experience after the Croatia / Spain game.

You are right canderson, by doing so you can generate a .txt file, you'll find in the "download" folder.
Almost impossible to achieve a standard format as .csv, .gpx, .ov2, .kml or at least .xls...
Finally, after a loooooong struggle, I could reach the GOAL, switching between wordpad, Word and Excel, but the procedure is a REAL pain in the @zz...
Unbelievable that TomTom won't give backup YOUR data once you save in your device!!!

It appears that the download file is the name of the device with MyDrive appended.
Does either one of you two have a production NAV4 as I am getting unsatisfactory results. 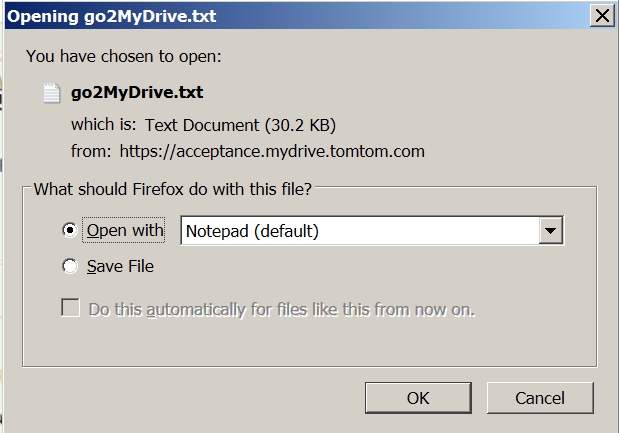 Opened a production MyDrive ONP and got all My Places data.

Will see after the game if I can make useful data from it.

Hi Arno, you have to work alot, notepad+Word+Excel to reach a useful standard
Ad

When I used POIs on my 930 I simply used Tyre.
I am not into POIEdit and the like. Does anyone recognise the data as presented from using other editors?

@Arno
I'm not getting the Save/Open option when I click the option to download the file. As noted, I get a white box which fairly quickly disappears to no apparent result. Perhaps it's an issue with the 'acceptance' site we're using. Nothing else over there is working at the moment.

@Ciro
Which "download" folder were you looking at when you found the text file?

@Arrno
You have to select "download data" in the MyDrive settings menu.
Than you should be able to generate a .txt file you'll find in the default "download" folder in your PC.
Only at that point starts the trouble...

@Ciro
That's what I did. Look at my attachments above. You should have had the same if using Windows.
I suppose you meant to address canderson.

@canderson
I should have made it clearer. The error message came when using 'acceptance'.
Do not try using a non-Production device on the Production MyDrive.
That is when I got the error message when trying to open the TXT file in the Downloads folder in Windows Explorer.
Caution: The 'different environment' popped up after that.
I immediately switched back to 'acceptance' and the message has not recurred.

Try not to use the explorer, but to open first notepad, than the .txt file...
Yup, I ment to address canderson, sorry
Ad

@Ciro
Thanks. Did that but the result is the same as if double clicking the xyz.txt, seen in the Downloads folder with Windows Explorer.

@Arno
Quite strange... I can easily open the file with notepad; the worst part starts at that point!
Get a useful format from the .txt file is a nightmare and you need notepad+word+excel; than an online POIs converter!!!
I asked to TomTom customers support how to convert it or if any tool exists, but their answer was: "NOOOOOOOO"...

@Ciro
Sorry for not explaining properly.
I do not need to open Notepad first.
Double clicking the text file in the Downloads folder will open it automatically in Notepad.
Ad

@Arno
Did you try to open it with another word processor?
You must log in or register to reply here.