Where can I get a repair done??

Iv'e got a TomTom Go Camper satnav which I think is in need of a repair and it's out of warrantee.

For some reason if I have it logged into MYDrive the satnav freezes up or keeps re-booting or the screen goes completely black, sometimes it turns itself off.
All of this seems to have happened since I dropped it, although there's not a mark on it not even on the screen.

The only way it runs ok, is by logging off MyDrive on the satnav which I didn't have to do, I just simply left it logged on.

If anyone has had repairs done elsewhere, were they any good?

Thanks to anyone who can help
Ad

Another data point might help to better understand what has happened before you go the repair route. Let's look at some basic troubleshooting first.

I assume that when you say you are logging out of "MyDrive", you mean you are using the 'Stop Syncing' button to cease comms with cloud services?

What method are you using to connect your device to the outside world? I assume a phone? Using BT or WiFi or internal cell modem? (There are a lot of 'Camper' models out there with different connectivity). What are the first two characters of your unit's serial number?

Are you having any issues receiving traffic data on your device? It uses the same RF components internally to receive both cloud data and traffic data.
C

Thank you for your quick reply, logging out of "MyDrive", yes, I click the "Stop Syncing" button to stop comms with cloud.

Connecting with the outside world, I leave the WiFi on all the time and if I want to connect to "MyDrive" via my computer I use a usb cable so its hard wired, I don't have a mobile phone connected to it.

The first two characters of the serial, number is ZA.

Traffic data, to be honest with you Canderson, I'm a silver surfer and doesn't take a lot for me to get mixed up, so as far as receiving traffic data is concerned rightly or wrongly I just sit in the queue if there is one.

Great. That's the camper equivalent to the GO 6200.

The reason I ask about traffic is that your device uses the same hardware to get traffic as it does the cloud data that you 'sync' to.
If traffic is working, then we don't have a hardware problem, and we can move along using that as a starting point.

So if you could fire up your device with a WiFi connection so that traffic will be available, check around for points/times where traffic is likely and see what shows up on your device's map.
C

Sorry about all this Canderson, as I said Iv'e never bothered with traffic ie just sat in the queue so not sure what I need to do.

On the satnav in settings it says Traffic Connected, Mydrive Connected, Bluetooth Set up phone (so not connected), WiFi connected.

I've attached a picture of the satnav with roadworks marked in red, the ones marked in blue appear to be moving on the screen if you follow what I mean.
I don't know the difference between the moving ones and the stationary ones.

I don't know if I need my mobile phone connected or not????? 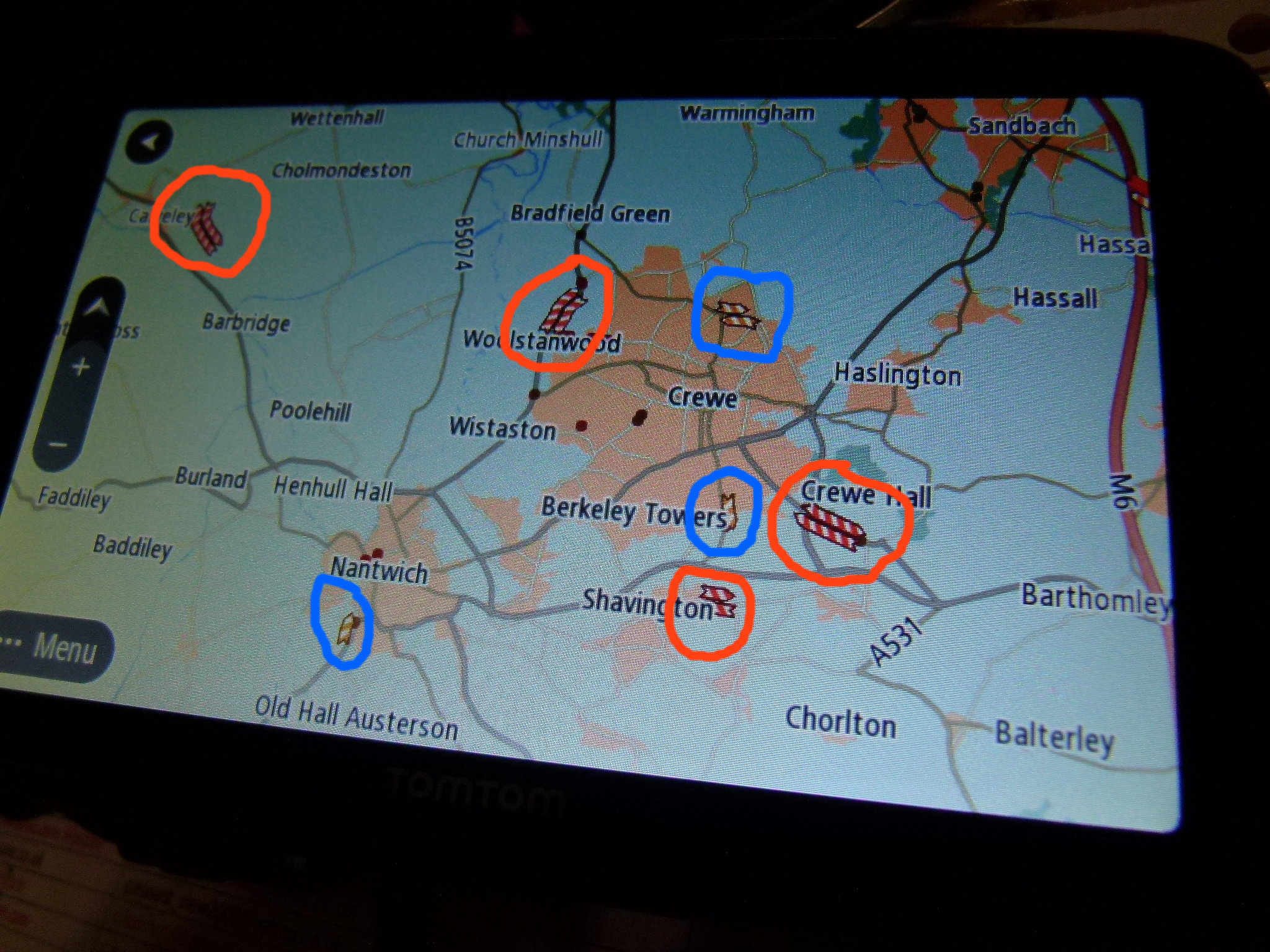 Yes, only units with built-in SIM/cell systems can manage without a phone. I keep my phone set up as a WiFi hotspot and connect my devices to that since for a long time, it was far more stable than the BlueTooth connection.

What you are showing above (striped lines) are closed roads. What would be more valuable would be realtime traffic incidents that require ongoing communication with TomTom's traffic server. If you zoom in on the smaller dots, are these in fact striped lines as well? Those are various sorts of road closures. We're looking for jams, accidents, etc. Those will be solid colored lines, with red being the 'worst'. A bit of rush hour ought to do it, even in Crewe, though looking at larger cities will show more of them!

While your device claims that it's connected to the cloud and traffic services, we want it to prove that to us!
Ad

I’ve downloaded "Mydrive" onto my mobile phone, once downloaded I scrolled throught the various screens until I came to the one which says "Get started" 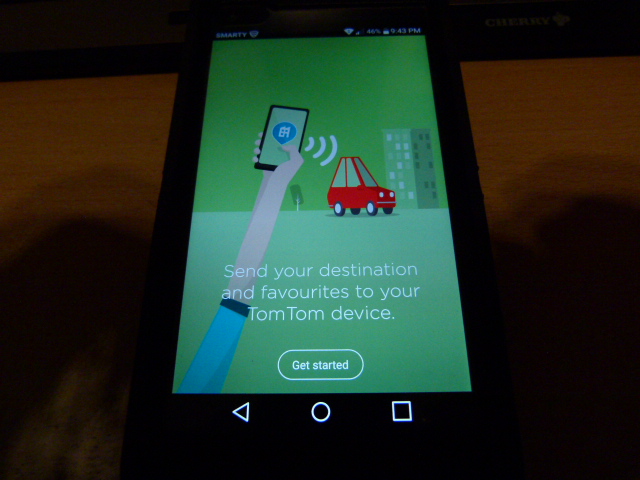 tapped "Get Started".
I was then presented with "Your information & privacy" screen and tapped "OK"

Next screen was where I filled in my email address and password. 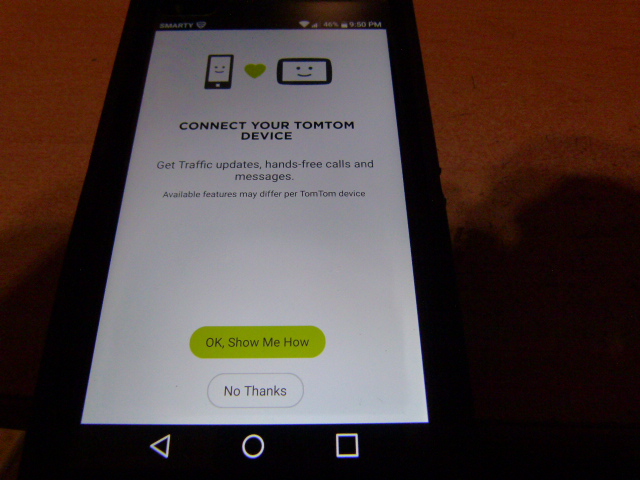 Next screen which is the "Traffic checker" 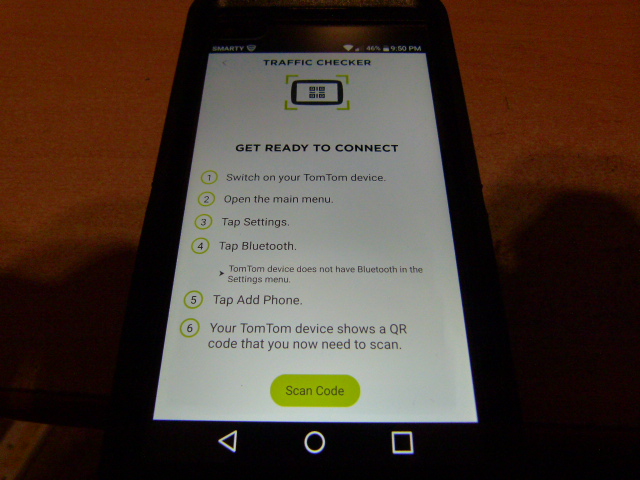 If I go back and tap "Tomtom device does not have bluetooth in the settings menu" Ive marked it in red. 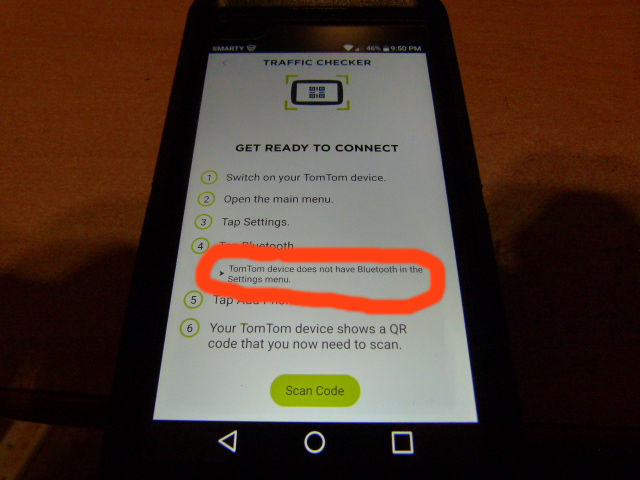 I'm presented with a screen asking where I bought the device

Below are 3 further screens which appeared after the one above. 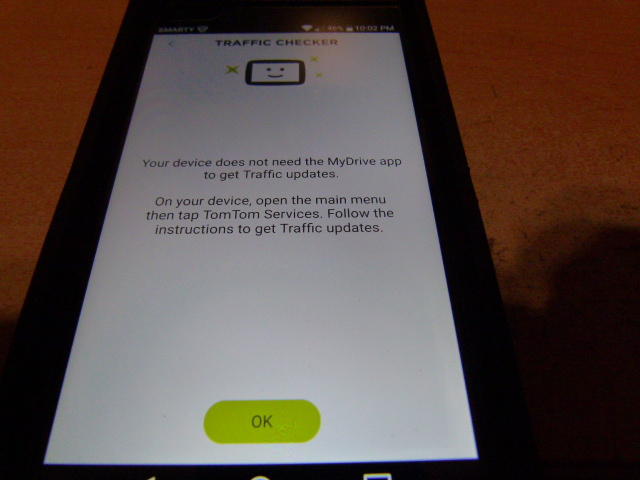 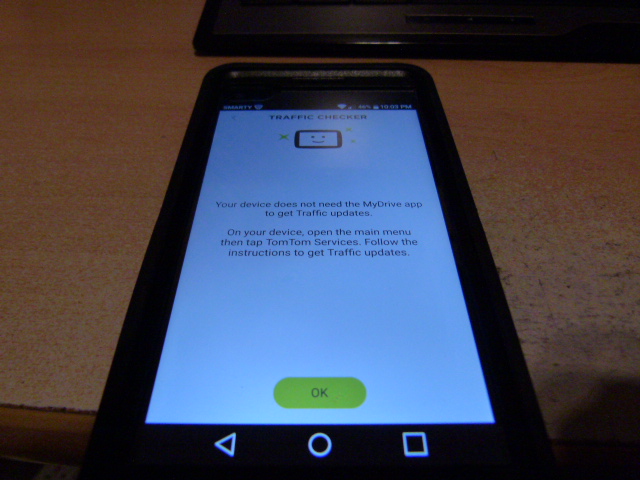 I can see why I never bothered trying to attach a mobile phone to the satnav.

It only appears as though TomTom has bluetooth provision for setting a phone up? 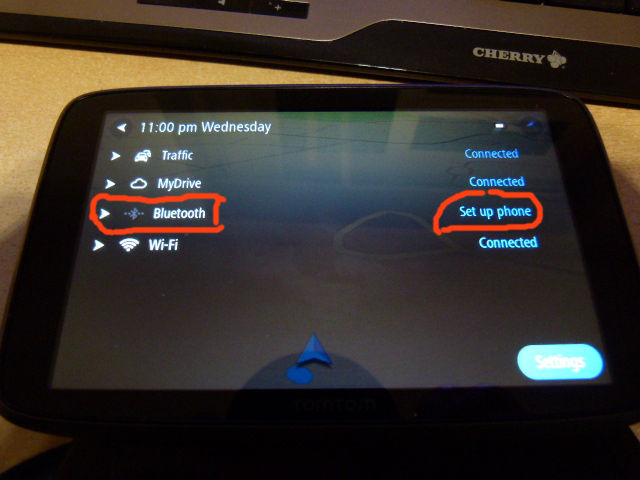 Even if you need to send information from the TomTom MyDrive online cloud page to your device, you don't need your phone running the MyDrive app and eating up your phone's battery. All that phone app will do now is confuse the issue in the middle of our troubleshooting session.

For the time being, just use WiFi (either your home router or your phone set up as a WiFi hotspot) without running the MyDrive app on your phone or getting involved in Bluetooth, and refer back to post #6. Let's see if you are really getting traffic data or not.
C

OK Canderson, Iv'e now removed MyDrive from my mobile phone and the WiFi is showing as being connected to my computer hub.
Even though the phone shows its connected to my hub, it's still constantly searching, is this normal?
Iv'e included some pictures to show what I mean.

Do I need to have Mobile Data switched ON? 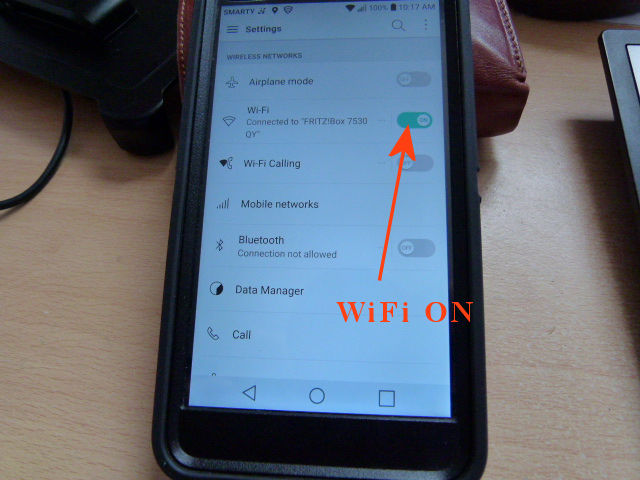 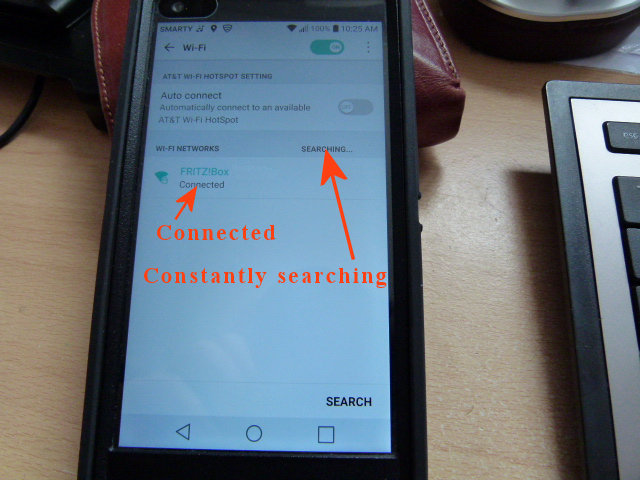 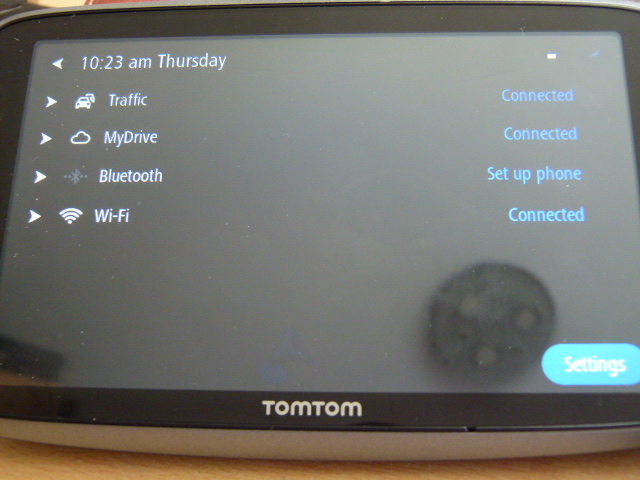 I assume Iv'e got everything correct, if so where do I go from here?

You don't need to connect your phone to WiFi - it won't be hooked up to WiFi over your home router while you're driving! You need to turn your phone into a WiFi hotspot, which makes IT available to your TomTom (like your home router can when you're actually home) to communicate with our friends in the Netherlands.

If you can't figure out how to turn your phone into a WiFi hotspot, you would instead accomplish the same thing by configuring your phone to supply data to your TomTom directly over Bluetooth (no app needed).

Not recognizing your phone, apart from it appearing to be some flavor of Android, I can't tell you exactly how to do either of the above since my screenshots won't match yours.

I'm guessing that the reason your TomTom shows connected to WiFi is because it's connected to your home WiFi router, and that if you leave home with it, it won't show WiFi connected anymore.

THAT said - good, it's WiFi connected at home. Whether it can communicate remains to be seen. Yes, I see the two cars up there in the upper right corner, but we want to confirm this with some real data if possible.

Try to find some actual traffic (not just the candy striped closed roads) anywhere in a busy area during rush hour. IF you can't find that, then we know that your device is failing to communicate properly not just to the cloud but to the traffic server as well.

If you can confirm that traffic is working, this means that dropping your device has not damaged anything internally related to your cloud/reboot issues, and we can eliminate that (finally) as a source of your problem and move on to the software question. So far, I'd say your hardware is looking very good.
Ad

You were absolutely bang on when you said the tomtom is showing its connected to WiFi because it’s doing it via my home router.

I tested it as you suggested by moving the tomtom away from the house and sure enough after a very short distance the WiFi dropped out.

I’ve done a factory reset and at least it seems to have stopped the tomtom from continually rebooting and the screen going black.

Unfortunately, when doing the factory reset, I lost some POI’s, I wont bother to tell you how long I spent trying to get them back on it, as they were not saved in MyDrive.

I’ve also managed to connect my mobile phone via Bluetooth, but I haven’t got around to finding out if it’s getting live traffic updates, when I do, I’ll let you know how it performed.

This may seem a daft question but, if I were able to turn my phone into a WiFi hotspot would anyone be able to access my phone?

If it is safe enough, I’ll try to find a video guide on how to go about doing it, because at the moment I haven’t a clue how to do it.
Ad

No one will be able to use your phone's 'hotspot' feature unless you give them the password. In that respect, it works just as your home router does.

Keep us posted on your progress, please!
You must log in or register to reply here.