How to check I can see Traffic Cameras whilist NOT on a Journey?

Having been caught by an average speed camera then realised that my Go 6200 WiFi .....wasn't showing speed cameras, I turned on voice as well as (or instead of? ) visual notification. NO DIFFERENCE. The clutter of parking stops and petrol station symbols didn't help so these are off now.

I had already tried the power off reset so that you get the Tomtom recording playing as it powers up ............... which made no difference, still no camera warnings.

I have now tried the "reset" via the menu so that everything is setup again, login to web etc. Now I'm stuck in terms of testing as the only local fixed cameras have been removed. The reason I say this is that according to a post a week or so ago the cameras, average speed cameras fixed cameras etc. ONLY show when on an actual journey.

This is a total PITA, as there is no way to check if the reset has worked other than actually driving which would mean at least a fifty or sixty mile round trip., tedious to say the least if I have to make a trip every time I change a setting.

There simply must be a way to setup a destination and then expand the map to see where the cameras are???????

Could it be that this (actually showing camera locations on a map) isn't allowed by law in the UK, which is why my previous posts answered by a moderator all say give Tomtom support a call?

The only thing I don't have setup is the mobile phone app as my phone is low spec, but as speed camera data is downloaded (and regularly updated) I'm assuming that this info is actually in the sat-nav? and so should work even if there is no connection to the phone. On which I have Internet access, bluetooth and WiFi ON.
Ad

The only speed camera information that ever shows up is that bit that pertains to a particular planned route.
Once you have set a destination, you should see any speed cameras on your route displayed on the map as you zoom up. I assume this is also true for average speed areas (which we don't have here).
But no, all of the cameras won't appear -- just the ones that would normally impact your specific journey.
O

I tried this before (admittedly before the two resets) I will check this again.

Yes I appreciate that only the cameras on a planned route may show up, but this for now would be sufficient to check that the camera information is working now.

PS Would it not be a good feature to be able to see all speed cameras, unless of course you think that other sites that do show cameras would use this to perform their own updates.

Planned another route, same result NO CAMERAS, checked against this site which has removed two cameras I know have been junked (correct) and shows two average speed zones I know about.

Strange. Works here on my 620. So you can't see any speed cams when zooming up on a planned route that contains them?
But do you see them while driving?

An example .. This one is a fixed red light camera, as it happens... 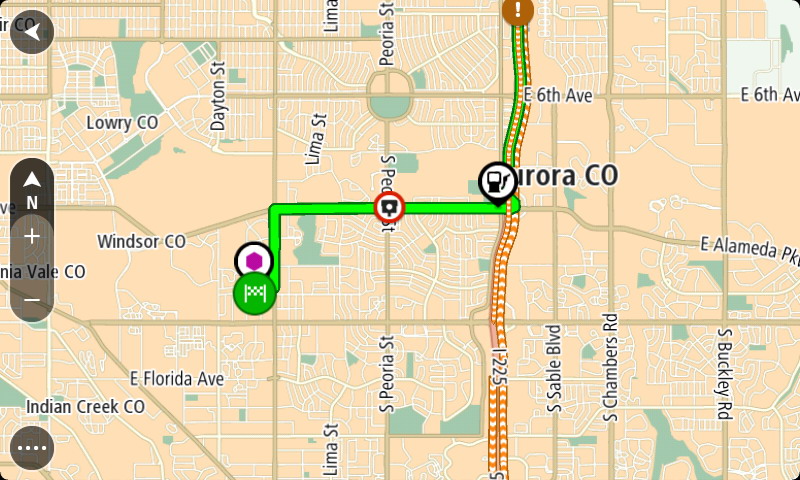 I would have to drive sixty miles to check.

Have reset the MyDrive login on the Go 6200

I can't load MyDrive on my phone as not compatible.

I'm working via WiFi at home

I have reset all parameters as per as this post , the first answer...

Old_Raft said:
I would have to drive sixty miles to check.
Click to expand...

It may be different in the UK and with your X200 device. canderson's and my X20 (no built in life traffic) both show cameras when planning a route past them and tapping "Drive".
In my case only red light cameras as we do not have speed cameras in Ontario.

Old_Raft said:
I would have to drive sixty miles to check.
Click to expand...

Would be worth knowing since that will determine whether they're missing from the unit or just not visible on a planning map.

I can't load MyDrive on my phone as not compatible.
Click to expand...

Not suggesting that you load MyDrive app on your phone, but rather, attempt to use your phone's WiFi tethering capability (if it has it, and won't cost you extra) to provide your 6200 with an alternative link rather than using its own internal modem. By rights, it shouldn't matter, but it's an option should you find yourself needing it for any reason due to any acting up by the device's own internal modem.
O

The Go 6200 is/has WiFi, which is on and so at home where I'm trying to get it to work it connects directly to the web via the "MyDrive" setup (i.e. nothing to do with the mobile "app" just the way that the 6200 is configured to connect to your Tomtom account on the web)

I'm not sure how the 6200 decides where to get the traffic info from but when connected as above at home this appears in spades (a very good feature) I assume this is via the built in "SIM" which would mean that without a phone in the car the 6200 would still pick up traffic info (not tried this just an assumption). Equally as the speed camera updates are downloaded to the 6200 then I would assume these too would simply appear when you plan a route, i.e. again no need for a phone / internet connection, other than maybe to get an update on the move.

Although a few days ago I had my mobile phone on, with bluetooth, WiFi and "Mobile Network" (Internet) on, I have been using my home WiFi for testing. With this I have tried the two reset approaches, being connected to the web (MyDrive on the sat-nav) NOT being connected to the web. Power off resets for both situations etc. I also created a new account as suggested in another post, although this may not make any difference as the TT system knows your sat-nav serial number so you config at their end is most likely the same.

None of these approaches gives me any speed cameras on a planned route via motorways where I know there are lots of cameras.

1350 now and Just waiting for 2 am in case Tomtom take a late lunch if the support is actually based in the UK.

Just called, firstly there is an (known?) issue with not being able to see speed cameras.

Second, when you plan a route when at home you will ONLY see the traffic cameras on the side bar. (I only see two petrol stations on a 200 mile route !

Thirdly when on the actual journey you will ALSO see the traffic cameras on the map. (Had to explain I have seen the map above which I assume was made during driving?)

The reason for "second" is in a way obvious in that in the "map view" there isn't a side bar.

I have wasted a whole day or more on various updates, resets, power on/off new accounts etc. If you have the same issue perhaps better to wait until there is a software fix. I will post when I get something.

Must be unique to the 6200 version with SIM, for some reason.
When I plan a route, I can zoom in to see traffic cameras along my route (but only along my route).
Hope they get the bug fixed, as I can understand how it might be a little inconvenient.
FWIW, I appear to be running app 18.200.0018 here.
Ad

Who knows if the feature on one TT is the same on another, support informed me that I would only see them on a planned journey on the side bar (whilst at home) and then see them en-route on the map too.

They didn't mention where the settings were or the fact that the setting for voice alerts as well as well as icons is quite separate from the actual selection to turn on alerts.

My previous support experience was similar in that the info I received about adding speed cameras and speed limits that info wasn't quite right either.

As soon as they issue the fix I will check.

Now I have to create some new posts on the odd mistakes the 6200 makes on local roads and roundabouts, like "take the second right" (when there isn't one, and it's actually the first right you need) and take the second exit from the roundabout (which has been a crossroads for more than a year) when the map shows the 3rd exit, (exits not changed since the conversion to a crossroads) is the actual route to the motorway. Ho Hum...

Admittedly my old Go 520 made mistakes locally but not on long journeys.
O

Received an Email today asking me to run an update, connect to PC etc.

The M25 has hundreds of cameras including average speed in several sections, not sure they need a "mobile" but maybe they have lots of police available (NOT).

This however (even though at last speed cameras can be seen on the map view, they must have changed this in the two days since I made my initial call as the help desk person said they DIDN'T show on the map view only the side bar.

Sooo back to square one of one hundred but at least a single camera is visible now.

Updates here as I receive them.
Ad

As of today 22nd Oct 2018 still no update from TT, I now interestingly see some mobile cameras on the M25 north of London. This is on both the side bar and the map view.