Via 1525 - Network Status Not Connected

Am I missing something? I've been trying all week to get the traffic working on this thing!

Any help would be greatly appreciated.

Your VIA 1525 does not have an internal cell modem. To get your unit to operate in the vehicle you need to have created an account and use your phone as the data connection to TomTom to receive the traffic data. This is done using the MyDrive app on your phone (Android or iOS). Can you tell us whether you have done any of these things yet? If not, let us know and one of us will walk you through the steps.
P

Well that sucks since I still have a flip phone and I don't think I can even do app's and never have.
Now when I bought this Via it said nothing in the description about having to have a phone to make it work!
My old TomTom got traffic without a cell phone until TomTom decided services were gonna stop for that device.
Is there a TomTom nav. device that gets traffic without the use of a phone?

Thanks for your reply
P

Is there a way to make it work without using a phone.
Damn, I'm so old school!

No, not really. It might be possible to use a 'dongle' that picks up traffic from FM stations, but it isn't nearly as accurate as the phone method.
Actually, it wasn't TomTom that stopped services --- it was AT&T taking down the 2G cellular service that the older devices depended upon. My old GO 1535 used that method, as did my old GO 740, but both became obsolete - for traffic anyway - when the 2G service disappeared in North America. So now we use smart phones or phones that can become WiFi Hot Spots to make the connection back to TomTom.

I do not think that your Via can operate using WiFi, which would be a 2nd option if your flip phone can work as a 'WiFi Hot Spot', and if your cellular carrier has a plan for that service that you could use. If your phone CAN act as a WiFi Hot Spot, then trading your current Via for a different model that can use WiFi to make the connection would work for you. The GO 520 and GO 620 can do that, as can the GO Comfort 5 and 6" screen units. GO 52 also has that ability, I believe.
P

- Your TomTom device includes regular software updates, fixed speed camera updates, and seasonal (4x per year) map updates, as well as traffic and mobile speed camera services. These updates and services will remain available for the lifetime of this device. Device lifetime, or the useful life of a device, is the time during which a device is compatible with TomTom service and software updates, content, and accessories. A device will have reached the end of its useful life when that device or app is incompatible with TomTom service and software updates, content, and accessories. To download these updates on your device, you must have one of the following: an active Wi-Fi® connection (ii) a computer or smartphone with an Internet connection (iii) a built-in SIM with a data plan. For more information on device lifetime, please visit tomtom.com/lifetime.

PITBULL said:
Will this phone work with my Via 1525?
Click to expand...

Quite possibly, as it supports WiFi, but can't tell with the specifications I can see. What you're looking for on your phone is the ability to support a WiFi "hot spot" that allows your phone to act as a WiFi connection to other devices. Also, there is some chance that your carrier will charge extra (perhaps $10 per month) for that service. The best thing would be to contact your carrier to ask a) does the phone in fact support acting as a 'hot spot', and b) what charge, if any, is there for that service?

But even so, you would need one of the TomTom models I specified above that supports WiFi, not the one you have, to make that work. Your 1525 doesn't include WiFi capability. Your 1525 would only provide traffic with a smart phone (Android or iOS) that would run the TomTom app that brings the traffic to the device.

In short, the two devices you own (phone and TomTom) aren't going to work together to get you traffic. You'd have to change one or the other of them to get where you want to go.

I think the Via 1525 is ONLY capable of getting FM traffic using a RDS-TMC antenna.

@dhn
Sorry -- you're right. The 1525 doesn't even seem to have Bluetooth connectivity. And RDS really isn't a good substitute for Live traffic.
@Pittbull
Are you in a position to trade/return the 1525?
P

I don't own the phone above. Just thinking of buying it because its a flip phone and it says you can do apps on it.
The flip phone I own now can't do apps.
This is such a nightmare! I thought this thing was gonna work after doing the computer thing, now I've gotta buy a phone and that may or may not work.
Ad

Careful now -- dhn corrected me, and it's clear that the 1525 doesn't handle Live traffic at all, only RDS, so the phone isn't even an issue.

Live traffic requires that the device can do either WiFi or Bluetooth, and it dhn's (and mine too, now) understanding that the Via 1525 does not do either. We don't have one in front of us, but please search your menu system for any hint of Bluetooth connectivity. If it doesn't have that, then you're stuck with what we call RDS-TMC traffic. TomTom sells a 'dongle' for that. It pulls in traffic information over FM station subcarriers that isn't as precise or detailed as Live traffic, but it can help. IF, and I say IF, your device is a Via 1525TM (and the "T" in there is CRITICAL), it should have come with a car power cable that has a little oval bit on it, perhaps 3/4 to 1" in size. 1) Did your box say anything about TM? 2) Does the cable that came to plug into your vehicle have the little oval thingy along the length of it? It looks like this >> https://www.tomtom.com/en_us/drive/accessories/chargers-cables/traffic-receiver/

Here is some info on RDS-TMC
https://en.wikipedia.org/wiki/Traffic_message_channel#United_States_and_Canada
If all that canderson mentioned applies, don't rush out and buy the antenna egg type cable, check the coverage in your local area first.
Here, in the Greater Toronto Area only about 10% of the major roads are covered.
P

Yes my TomTom is Via 1525 TM. Sorry for the confusion in not mentioning the TM part.
It does have the traffic receiver and does offer lifetime traffic.

TomTom VIA 1525TM
The TomTom VIA 1525TM offers essential navigation, free lifetime traffic, and free lifetime map updates*. Finding destinations is simple from the Search menu or by touching a point on the map. Advanced Lane Guidance helps you prepare for exits and intersections by clearly highlighting the correct driving lane for your planned route. 5 inch touchscreen.
- Your TomTom device includes regular software updates, fixed speed camera updates, and seasonal (4x per year) map updates, as well as traffic and mobile speed camera services. These updates and services will remain available for the lifetime of this device. Device lifetime, or the useful life of a device, is the time during which a device is compatible with TomTom service and software updates, content, and accessories. A device will have reached the end of its useful life when that device or app is incompatible with TomTom service and software updates, content, and accessories. To download these updates on your device, you must have one of the following: an active Wi-Fi® connection (ii) a computer or smartphone with an Internet connection (iii) a built-in SIM with a data plan. For more information on device lifetime, please visit tomtom.com/lifetime.
Last edited: Jan 11, 2020
P

Nope. That is NOT a rds-tmc combo antenna/car charger. See what it should look like in the link provided at the end of canderson's post #12. I don't know where you bought your device but, if from Tomtom, it should have included the proper rds-tmc cable.
Ad

It says traffic receiver on it.
P

Put the app on the wife's smart phone and still no network status or mydrive on the tomtom when in car with smartphone.
Last edited: Jan 11, 2020

Then I'm sorry I gave you false information.
Ad

Arno has a pic -- evidently there's a NEW traffic receiver without an egg where you'd expect it. He sent it to me. I'll repost here. This is what he sent:
Pitbull -- does yours look like this? 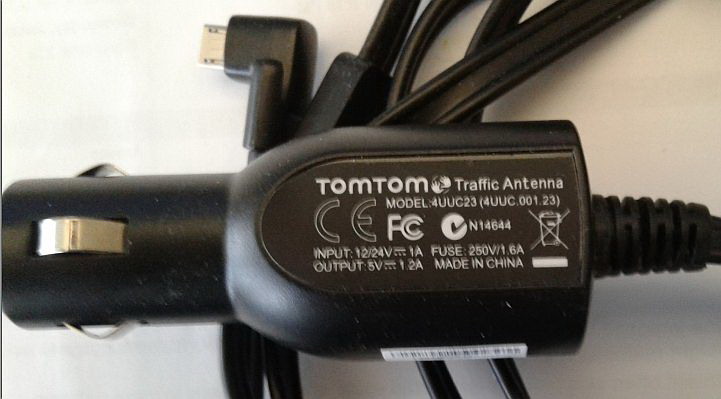