Folders & Files and What Is This 'Root Directory' I Keep Hearing About?

Folders & Files and What Is This 'Root Directory' I Keep Hearing About?

We tend to throw a few "computer-y" words and phrases around when we talk about our TomTom's and we sometimes forget that not everyone is quite so familiar with some of the technical terms, so here are a few of the more common ones:

FILES are the basic items on a computer or computer-based device like a satnav system. They come in many types, some are program files or "executables" which actually DO things, others may be just pictures or sounds or other bits of data. On something like a TomTom, the purpose of some of them will be fairly obvious to those in the know, but many of them will be totally mysterious to most users. That's not to say they are not important!

FOLDERS are simply "containers" for files. Think of them like envelopes with pieces of paper (the 'files') inside. Sometimes you may have 'folders within folders' too. There's nothing wrong with that and it's very common on computers. On a TomTom it only occurs in a few places.

How these look when you look at your TomTom's memory using Windows Explorer (or the MAC equivalent) on your PC.

Anything that is a FOLDER will usually have the same yellow icon like the ones below. Double-clicking on them in Windows should open the folder to show any files inside.

Files can have many different icons, depending what windows thinks they are. Here's a general example (nothing to do with TomTom specifically)... 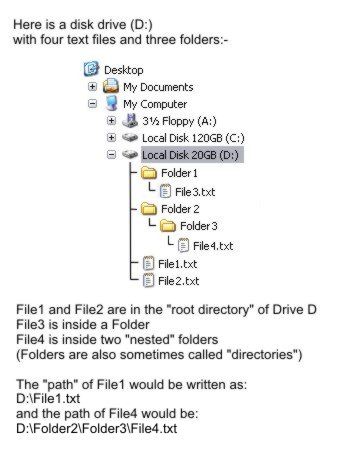 (Your drive letters and icons will probably be different to mine)

What is it? Where is it?

Well it's a rather old fashioned computer term.. and it just means is that the files are in the "base level" of a drive or memory store, i.e. NOT inside any other folder.

So for me the TomTom's system files would normally go in the "root" of Drive H: 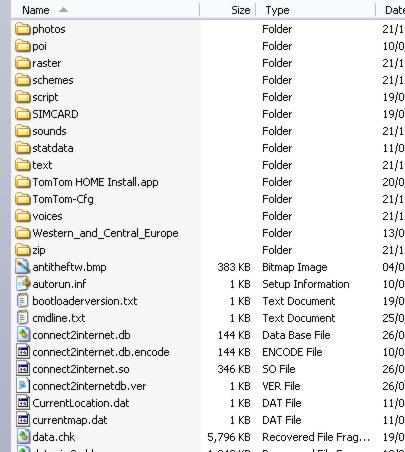 All the ones in the top half with the same yellow picture icons represent folders. If I clicked on one I could open it and see lots more files inside each one.

The bottom half are all files of different sorts. These can have many different picture icons which windows uses to try to give an idea of what they might be. Notice the 'Western_and_Central_Europe' folder which we often refer to as the "map folder" because it will have a different name depending on what maps you own on your TomTom. If you wanted to add some POI categories of your own, that's where the .ov2 files (and their .bmp icons) should go.

There's also the 'poi' folder. (which is used by TomTom to store some extra info about POIs that Home has added. The POIs themselves are still stored in the map folder, just like the ones you create or add yourself. One of the files further down the list would be 'poi.dat', which is the data for all the POIs that came bundled on the TomTom when you bought it.

One final thing to watch out for...

Windows is not very clever. It doesn't REALLY understand what any particular file is for. All it knows is that a file with a certain set of three letters at the end is USUALLY for a specific thing. So a ".bmp" is a picture file and a ".dat" is a data file of some sort, etc.

But TomToms are not actually restricted by the same conventions that Windows uses, so sometimes Windows gets a bit confused by what it sees. A classic example is when Windows sees a file with ".chk" at the end of the name. Windows thinks they are bits of file left behind after a computer crash or other problem, so they are normally junk that can be thrown away, but to a TomTom they are vital files.

So don't start deleting things on your TomTom without being VERY sure of what you are doing!
Ad